About CP Has Heart

At CP, we know that a railroad may serve as the arteries of a nation, but at its heart is community. That’s why, through CP Has Heart, we’ve already helped raise more than $23.3 million to help improve the heart health of adults and children across North America. And along the way, we’re showing heart whenever we can. Find out more on www.cpr.ca. or @CanadianPacific.

Dedicated to the best life for every child and youth, CHEO is a global leader in pediatric health care and research. Based in Ottawa, CHEO includes a hospital, children’s treatment centre, school and research institute, with satellite services located throughout Eastern Ontario. CHEO provides excellence in complex pediatric care, research and education.

We are committed to partnering with families and the community to provide exceptional care — where, when and how it’s needed. CHEO is a partner of the Kids Come First Health Team, a network of partners working to create a high quality, standardized and coordinated system for pediatric health care that is centred around children, youth and their families. Every year, CHEO helps more than 500,000 children and youth from Eastern Ontario, western Quebec, Nunavut and Northern Ontario. 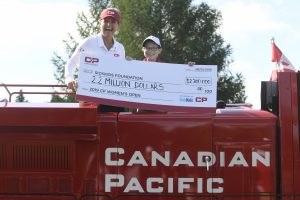