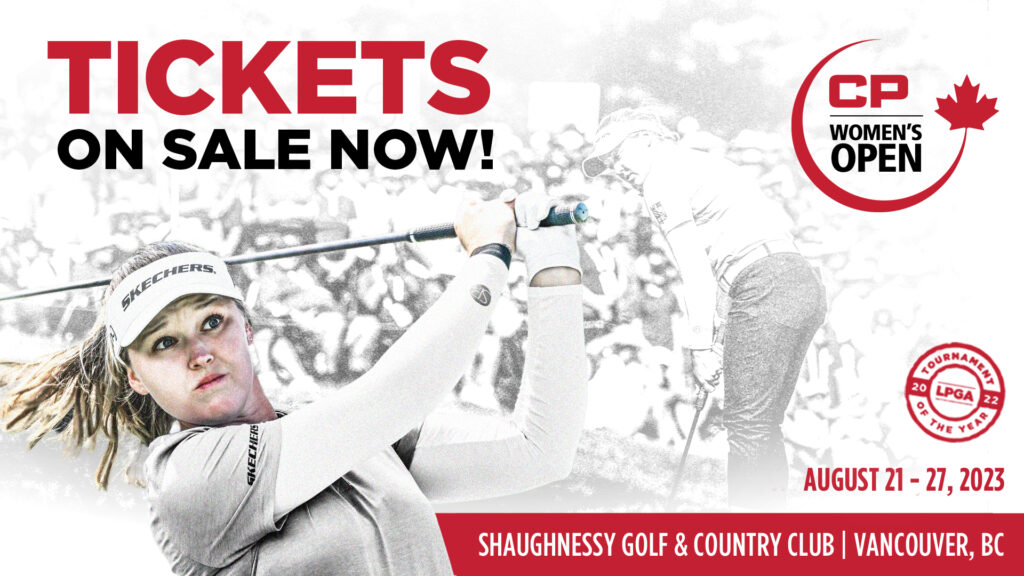 The 49th playing of Canada’s National Women’s Open Championship is set for August 21-August 27, 2023 in Vancouver

(Golf Canada) – Golf Canada, in partnership with title sponsor Canadian Pacific (CP), is pleased to announce tickets for the 2023 CP Women’s Open in Vancouver are now on sale.

The 2023 edition of the CP Women’s Open will be held at Shaughnessy Golf and Country Club August 21-27, marking the sixth time the province of British Columbia has hosted Canada’s Women’s Open Championship, with the last time being 2015 at The Vancouver Golf Club, where Lydia Ko won her third CP Women’s Open title.

The 2022 CP Women’s Open at Ottawa Hunt and Golf Club was recently named Tournament of the Year by the Tournament Partners of the LPGA. The tournament, which set an attendance record of more than 73k fans, also received Awards for Best Community and Charity Engagement, as well as Best Sponsor Activation.

As the only Canadian stop across 33 official LPGA Tour events, the week-long event will draw the world’s best players including 10-time LPGA Tour winner and CP Ambassador Brooke Henderson.

Title-sponsor Canadian Pacific will once again be making a charitable donation to the host community through its CP Has Heart campaign. Since CP assumed title sponsorship of the CP Women’s Open in 2014, more than $16 million has been raised to support children’s heart health in Canada. This is the third time in the last four years the awards were handed out that the CP Women’s Open was awarded the Gold Driver for Best Community and Charity Engagement.

The week-long national championship features something for everyone including The Rink, Golf Canada’s signature Canadian themed hole that has grown in popularity at both national opens, a premium food experience at the Recipe Unlimited Fare Way, as well as partner activations, photo-ops, terrific golf and more.

First conducted in 1973, Canada’s National Women’s Open Championship has enabled the brightest stars of the LPGA Tour to shine on Canadian soil and has inspired the nation’s next generation of female golfers.

Join us to witness world-class LPGA Tour golf, activities for all ages, outstanding food and patio experiences and more. Get your tickets today and be a part of one of Golf Canada’s signature events.