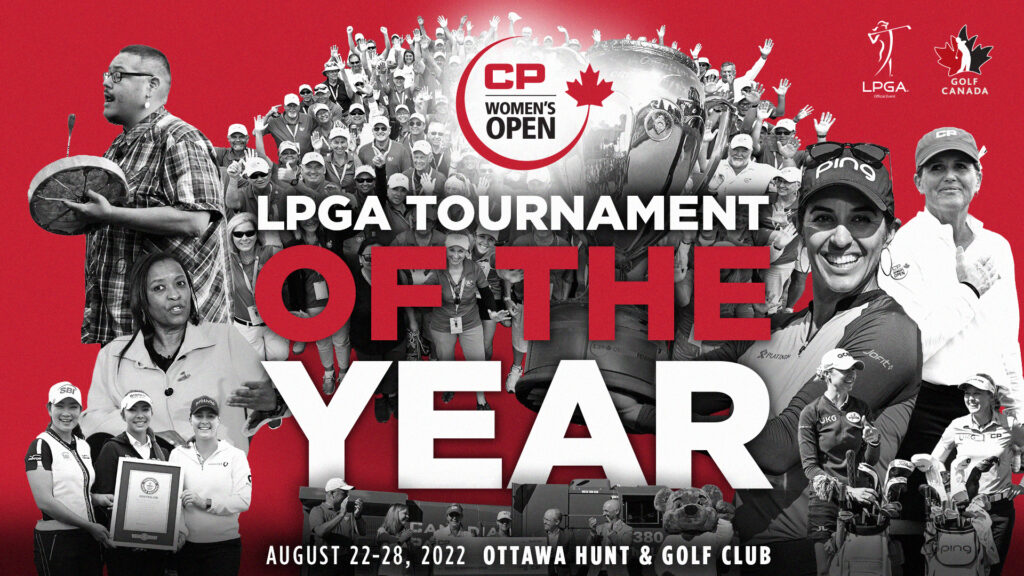 NAPLES, FLA. (Golf Canada) – ​The 2022 CP Women’s Open at Ottawa Hunt and Golf Club has been named Tournament of the Year by the Tournament Partners of the LPGA.

Tournament organizers from Golf Canada and Canadian Pacific were presented with a prestigious Gold Driver Award during a ceremony held in conjunction with this week’s LPGA Tour season-ending CME Group Tour Championship at The Ritz-Carlton Golf Resort in Naples, Fla.

The Tournament Partners of the LPGA (formally Tournament Owners Association) have a long-standing tradition of recognizing best-in-class tournaments with Gold Driver Awards as part of the season-ending event.

“This award is a true reflection of the hard work and collaboration from all groups and stakeholders involved with the CP Women’s Open,” said Tournament Director Ryan Paul. “Thanks to tremendous support from fans, players, volunteers, corporate partners and our host club, the 2022 CP Women’s Open was a resounding success and it is rewarding to be recognized with these significant awards.”

The Best Community and Charity Engagement Award was earned for the CP Has Heart community investment program, which raised $2.5 million in support of the CHEO Foundation and $510,000 for Perth & Smiths Falls District Hospital Foundation – the largest charitable campaign in the history of the CP Women’s Open.

Since CP assumed title sponsorship of the CP Women’s Open in 2014, more than $16 million has been raised to support children’s heart health in Canada. This is the third time in the last four years the awards were handed out that the CP Women’s Open was awarded the Gold Driver for Best Community and Charity Engagement.

The CP Women’s Open earned Best Sponsor Activation for its Hilton on the Green experience – a first-of-its-kind opportunity for Canadian golf fans to stay in a unique, 1-bedroom pop-up hotel room on the 8th hole at Ottawa Hunt and Golf Club.

Hilton on the Green included a personal concierge, golf cart, gourmet meals including breakfast in bed, exclusive view of the action, as well as world-class service and hospitality from Hilton.

At the 2022 CP Women’s Open in August, South African Paula Reto set the Ottawa Hunt & Golf Club course record (62) en route to besting the LPGA Tour’s best players to capture her first career win on Tour. By doing so, she took home US$352,500 of the US$2.35 million purse.

The 2022 CP Women’s Open in Ottawa was the most attended tournament in event history.

The stars of the LPGA Tour are headed back to Vancouver as next year’s CP Women’s Open will be contested at Shaughnessy Golf and Country Club August 21-27, 2023.

The championship will mark the sixth time the province of British Columbia has hosted Canada’s Women’s Open Championship, with the last time being 2015 at The Vancouver Golf Club, where Lydia Ko won her third CP Women’s Open title.