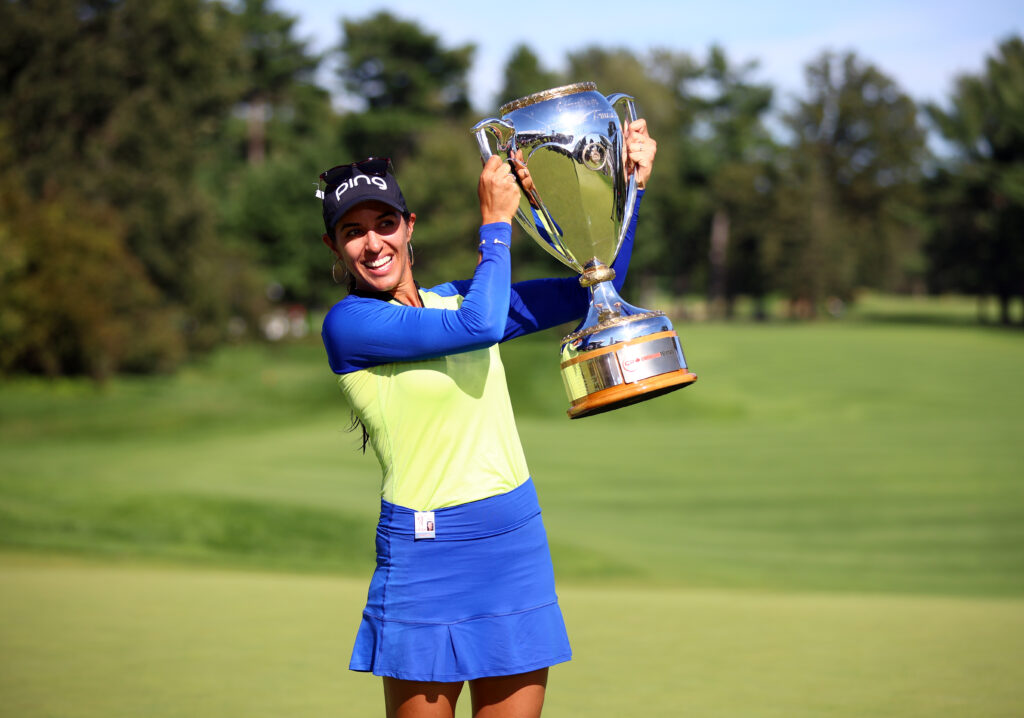 After setting the course record (62) in Thursday’s opening round at Ottawa Hunt & Golf Club, Reto became the first-ever South African woman to win the CP Women’s Open. The 32-year-old’s victory is also her first-career win on the LPGA Tour.

“I’m really, really excited, and just proud of myself for being able to stick through the shots and the routines. Sometimes I find that’s really hard to do, especially if you know you have only a few holes left,” said Reto. “I’m excited to celebrate with everybody, and I’m glad my first win was here in Canada for sure.”

The former Olympian kickstarted her round with a birdie on No.1 and followed with another on No. 3 to grab a share of the lead. Additional birdies on hole Nos. 6, 8 and 9 propelled Reto into sole possession of the lead, which grew as large as four strokes on the back nine. A late charge from world No. 3, Nelly Korda, made matters interesting down the stretch, but a par on her final hole vaulted Reto into the winner’s circle in the Nation’s Capital with a final score of 19-under-par.

The Purdue University product joins Sally Little, Buhai and Lee-Anne Pace as the only South-African-born winners on the LPGA Tour.

“Being able to win on the LPGA is such a dream, and even being from South Africa — and I did win in South Africa earlier in February, so I was like, Okay, I can do it again,” said Reto. “Ash (Buhai) was such an inspiration, especially being the AIG Women’s Open and she was so calm and so great on those playoff holes. I told myself, you know what? I can also do it. I also want to do it.”

After a birdie on No. 1, Korda scrambled through the early phase of Sunday’s final round but rediscovered her rhythm with a birdie on No. 9. She continued to chip away at the lead with another birdie on No. 11 and an eagle from the fairway on No. 12. The 24-year-old needed a birdie on 18 to force a playoff but ran out of steam, making par and setting the stage for Reto in front of a raucous Ottawa crowd.

Alena Sharp was awarded the Sandra Post Award as the low Canadian at the CP Women’s Open. The Hamilton, Ont., finished T17 at 10-under-par to edge Maddie Szeryk of London, Ont. for the national honour. Szeryk, who made her first LPGA Tour cut of the season, posted a T26 finish after an even-par 71 on home soil. Szeryk was 9-under-par for the tournament, remarkably making only three bogeys all week.

The Augusta National Women’s Amateur champion, Anna Davis, was awarded the Marlene Streit Award as the low amateur in the field at 4-under-par. Davis, 16, and Team Canada member Lauren Zaretsky were the only amateurs to make the cut at the CP Women’s Open. Zaretsky ended the competition at 1-over-par.

Though Brooke Henderson was out of contention on Sunday, the Canadian crowds still showed up to watch the 12-time LPGA Tour winner and two-time major champion. The Smith Falls, Ont., native says the support didn’t go unnoticed.

“It was so amazing. The fans this week were totally incredible. I never dreamed that this many people would continue to follow me all weekend, especially when I was so far down early in the pack,” said Henderson. “But they’re loyal to me and just meant the world to me to have them out here supporting.”

The following player transcripts from Sunday’s final round are available online: