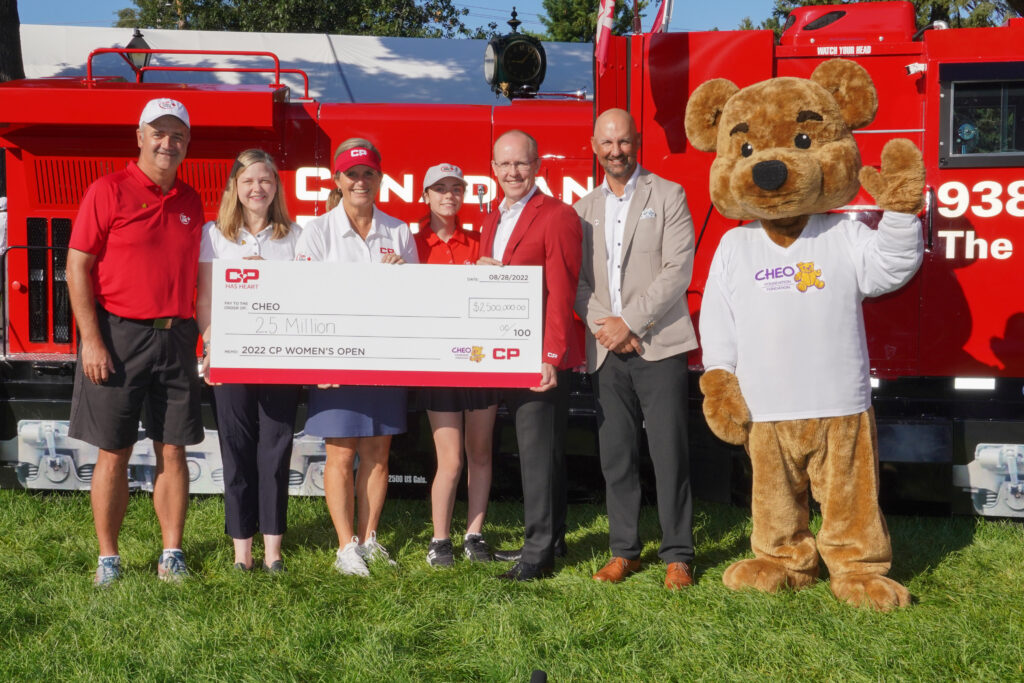 Paula Reto finished the week at 19 under par to take home her first LPGA Tour win and the $352,500 winner’s share of the $2.35 USD million purse, one of the largest for a non-major on the LPGA Tour.

“The CP Women’s Open returned to Ottawa with great fanfare and the best golfers in the world so that CP could raise funds to support CHEO’s important work and continue the legacy of giving to the communities where our employees live and work,” said Keith Creel, CP President and CEO. “The Ottawa community and the world’s best golfers did not disappoint, and we are proud to be a part of this world-class tournament.”

“We congratulate Paula Reto on her masterful play to win the CP Women’s Open,” added Creel. “It was a tremendous week of golf, but more importantly, together we have made a significant contribution to CHEO Foundation and to eastern Ontario, a key province in our network. CP is proud to continue to make a difference in communities across Canada through CP Has Heart, our community investment program supporting heart health initiatives.”

The total donation is the result of several fundraising efforts of the CP Has Heart campaign. Through CP Birdies for Heart, CP contributed for each birdie made by Ottawa Hunt and Golf Club members prior to the tournament and for each birdie made by LPGA players on the 15th hole during tournament play. CP also matched all donations made during a CHEO campaign online during February, which is heart month.

“This eagerly anticipated week was beyond anything we imagined,” said Steve Read, Acting President and CEO, CHEO Foundation. “When Golf Canada and the LPGA brought this world-class golf tournament to the historic Ottawa Hunt and Golf Club it was an exciting moment for everyone involved. When the generosity of this community, led by CP, turned enthusiasm and elite sport into care for young cardiology patients at CHEO, it became an inspiring reflection of what we can do when we work together. My special thanks to Lorie Kane and Brooke Henderson who showed such kindness to CHEO patient Aurora Amos as she represented all CHEO cardiology patients this week.”

“The Foundation would like to thank CP for their support, which helped raise $510,000 for cardiac care at our hospital,” said Kristine Fair, PSFDH Foundation Chair. “Overwhelming community support paired with the matching initiative that CP provided has created double the impact for our hospital. Funds raised through this partnership will allow us to purchase essential cardiac equipment that our healthcare team needs to provide the quality care our community deserves.”

“CP’s continued commitment to leave a meaningful legacy in the name of the CP Women’s Open has been extraordinary,” said Golf Canada CEO Laurence Applebaum. “We are so proud to experience the special impact of CP on the lives of countless Canadians, and we are thrilled that the CHEO Foundation, the Perth & Smiths Falls District Hospital Foundation, and the eastern Ontario community at large will benefit from their incredible generosity.”

What an amazing way to end tournament week at @OttawaHuntClub.

Kudos to our good friends and title sponsor @CanadianPacific for leaving a lasting legacy in Ottawa with their donation to @CHEO & the Perth and Smiths Falls District Hospital. pic.twitter.com/fs9UCUZvAY