An, Choi tied for lead ahead of final round of CP Women’s Open 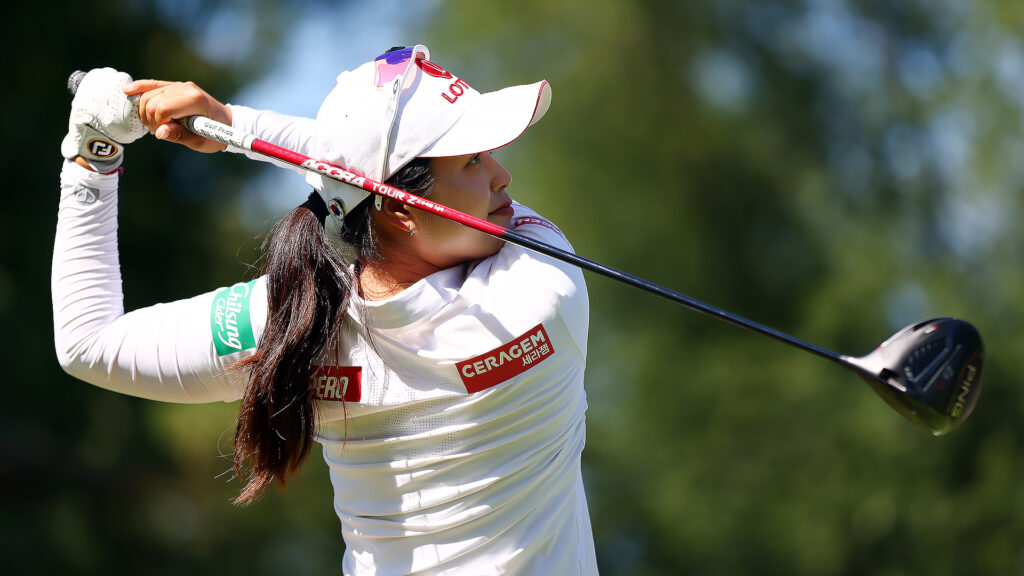 The final group on Sunday at the Ottawa Hunt & Golf Club will feature a pair of South Koreans in Narin An and Hye-Jin Choi, who hold a share of the lead at the CP Women’s Open heading into the closing stages of the championship.

An, who started the day alone atop the leaderboard, carded a 3-under-par 68 to keep pace with her countrywoman, Choi, during Saturday’s third round in the Nation’s Capital. The LPGA Tour rookie’s bogey-free streak came to an end after 48 holes of tournament play, but not before An rolled in four birdies to move to 16-under-par after round three.

“In general, I didn’t like my play today as much as I did yesterday and two days ago. But I think not making any big mistakes is a positive to take away,” said An. “I’ve known her since the KLPGA days and we didn’t talk that much with play going on, but it was fun being with her,” added An on her relationship with Choi.

Choi made up two strokes on her fellow South Korean, with a 5-under-par 66. The 23-year-old, still in search of her first victory on Tour, opened her round with a bogey but was mistake-free the rest of the way, making six birdies to earn a share of the lead.

Choi’s ties to Canada date back to 2016 when she won the Canadian Women’s Amateur Championship. On Sunday, she’ll look to become the fourth to ever win both the Canadian Women’s Amateur and the CP Women’s Open. Jocelyn Bourassa, Ariya Jutanugarn and Brooke Henderson are the only players to complete the feat. Choi was also crowned World Junior Girls champion in 2015 at Angus Glen Golf Club in Markham, Ont.

“I have good memories here and after that (winning the Junior), I won the Canadian Amateur Championship, so I have a lot of good memories in Canada. Right now, it’s hard to think about winning, but I hope it’ll be a good experience,” Choi said.

London, Ont.’s, Maddie Szeryk, posted a 2-under-par 69 and sits T11 after moving day at the CP Women’s Open. The Team Canada member’s poise was once again on display in high-pressure situations on Saturday, but she barely faltered. Szeryk converted three birdie putts in round three, including a closing birdie on No. 18, and sits seven strokes back of An and Choi.

“You know, it’s the Canadian Open. It’s a major for us. All the friends and family are here, and just to play well in front of the Canadian crowd is really special,” said Szeryk.

Brooke Henderson navigated through a challenging third round at her home club, finishing at 2-over-par on the day and T60 with the final round ahead of her. A 2-under-par front nine had the home crowd eager for more, but mistakes on holes 12, 13 and 15 cost the Smith Falls, Ont. native down the stretch.

Nelly Korda continued to hang around near the top of leaderboard with a 3-under-par 68. The world No. 3 is seeking a second consecutive victory after last week’s win in Spain on the Ladies European Tour but will need to make up at least two strokes on the leaders to do so.

Sunday’s final round is scheduled to tee off at 8:08 a.m.

The following player transcripts from Thursday’s opening round are available online:

PAIRINGS AND START TIMES FOR ROUND THREE OF THE CP WOMEN’S OPEN:

Click here for a link to pairings and start times for the final round of the CP Women’s Open on Sunday, August 28.

Experience the CP Women’s Open like never before by downloading the Golf Canada Mobile App on your iOS or Android device. Essential features include a live map, mobile ordering, leaderboard & pairings, tickets, breaking news, and special events. Plus, use the Golf Canada Mobile App to enhance your experience while playing! Find golf courses, track your game, set up matches against friends, access GPS yardages and more. Click here to download.