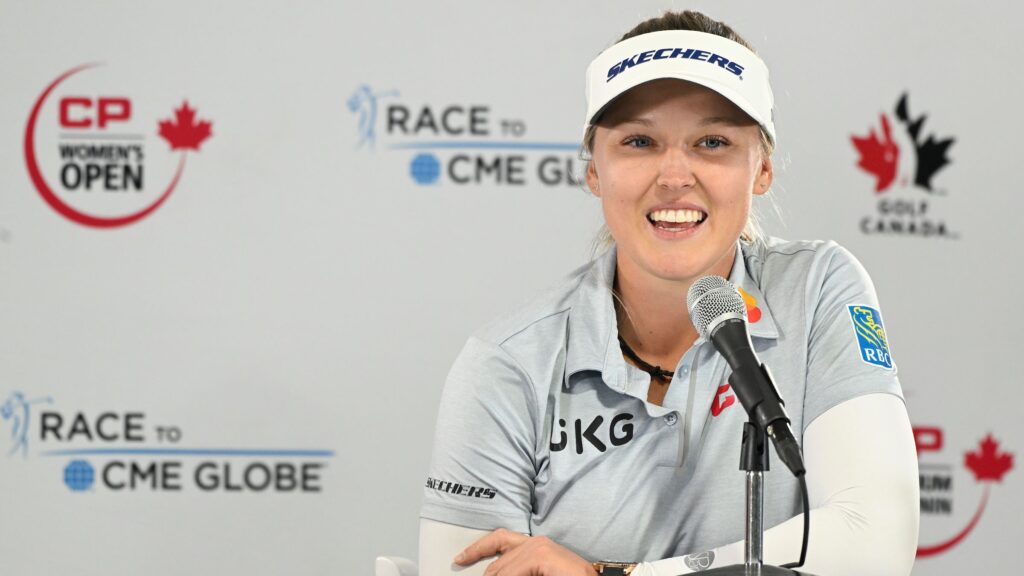 (Ottawa) – With the opening-round of the $2.35 million (US) CP Women’s Open less than two days away, tournament week at Ottawa Hunt and Golf Club continues to showcase the finest in women’s professional golf.

Wednesday, August 24th is Championship Pro-Am Day at the CP Women’s Open. The event will see professional golfers take to the course to entertain a field of amateurs as part of the LPGA Tour’s ‘Nine and Nine’ Pro-Am format, where amateur participants will play nine holes each with a pair of LPGA Tour professionals.

BROOKE HENDERSON FEELING AT HOME AT OTTAWA HUNT
Canadian sensation and hometown favourite Brooke Henderson told media Tuesday that she feels great heading into Thursday’s opening round, and is ecstatic to play in front of so many family and friends at the Ottawa Hunt and Golf Club where she is an honorary member.

“I’m so looking forward to this week. Every year it’s circled on my calendar, and I always get super pumped up for it, especially as the weeks grow closer to it,” said Henderson.

Having the last one in 2019, it’s just been so long since I was able to play in front of the hometown crowd. Even in the practice rounds yesterday and today there has been so many people out watching. It’s just amazing to have this much love and support from home. I feel like I’m super excited to tee it up on Thursday and hopefully get off to a fast start.

Henderson, a two-time winner in 2022 including her second career major and a 12-time winner on the LPGA Tour, returns to the national capital as Canada’s winningest professional golfer of all time.

The 24-year-old from nearby Smiths Falls, Ont. is one of 18 Canadians to play in this year’s CP Women’s Open, including Lorie Kane of Charlottetown, PEI – making her record-setting 30th and final appearance in the National Open Championship.

WORLD NO. 1 JIN YOUNG KO READY TO MAKE LONG AWAITED TITLE DEFENCE
It’s been over 1,000 days since Jin Young Ko hoisted the trophy to win the 2019 CP Women’s Open and after two years of cancellation, the world’s no. 1 ranked player is excited to tee it up in front of what is sure to be an electric crowd at Ottawa Hunt & Golf Club.

I’m always happy to be back here, Canada. I love Canada,” said Ko. “After the 2019 I was ready
to play, defend in 2020, but we had like worst in the world so we couldn’t play in Canada or wherever. So, it’s been almost three years actually to be back here, so, yeah, I feel good.”

MAUDE-AIMEE LEBLANC ENERGIZED IN RETURN TO NATIONAL OPEN CHAMPIONSHIP
After returning to professional golf following a brief retirement and earning her way back to the LPGA Tour, Maude-Aimee Leblanc is proud of her journey back to the CP Women’s Open and competing once again for Canada’s National Open Championship.

“Yeah, I mean, I feel like taking that year off was a huge, was very important for me. It gave me time to think and put things in perspective, and really also think about what wasn’t working in my previous nine years,” said Leblanc, who is enjoying her best season on the LPGA Tour. “I felt like my game was better than my scores and my results, so it was very frustrating. Putting seemed to always be the common denominator every year, so I put a lot of effort on that. Changed coach; worked on my putting a lot.”

12-YEAR-OLD LUCY LIN TO MAKE ANTICIPATED CP WOMEN’S OPEN DEBUT
Age is just a number, but this week at the CP Women’s Open, it’s an important one. After earning a spot in the field through the Monday Final Qualifier,  Lucy Lin of Vancouver will become the youngest person ever to tee it up in Canada’s National Open Championship (12 years, 7 months, and 12 days).

“Pretty excited, pretty hyped. Really no words to describe it,” said Lin, who will be going into grade 7 this fall. “The feeling is pretty awesome. It’s a dream come true, definitely being here like at very young age. But super excited. Going into Monday I wasn’t really knowing I would be here, but I did my best I could. But I ended up here, so I’m really excited about it.”

Lin’s historic feat bettered the record previously set by Michelle Liu of Vancouver who was 12 years, 9 months, and 7 days when she competed at the 2019 CP Women’s Open. Liu also earned a spot in the field during the Monday Final Qualifier.