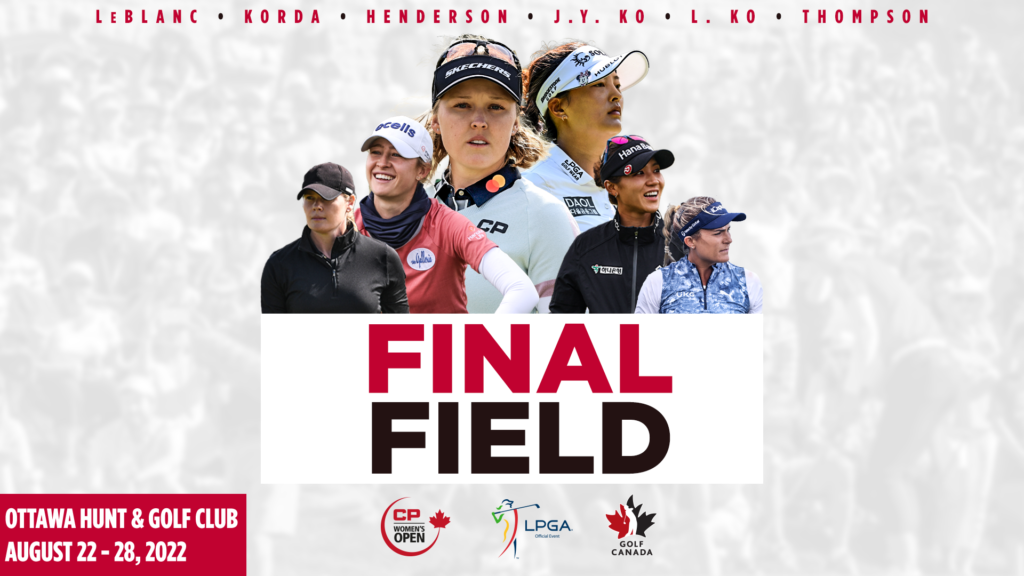 Golf Canada in partnership with Canadian Pacific (CP) announced today the final field of competitors set to challenge for the 2022 CP Women’s Open taking place August 22-28 at the Ottawa Hunt and Golf Club in Ottawa, Ont.

After winning the event in 2019, current Rolex Rankings world no. 1 Jin Young Ko will look to defend her title after two years of cancellation due to the COVID-19 pandemic. The 13-time LPGA Tour winner leads a stellar field that includes 82 of the top-100 players on the CME Globe standings including 18 of the top-20.

Canadian sensation and CP ambassador Brooke Henderson from nearby Smith’s Falls, Ont., who won the event in 2018, is sure to be crowd favourite once again at Canada’s National Open Championship. The 24-year-old honorary member at Ottawa Hunt and Golf Club is a 12-time LPGA Tour champion and two-time major winner—the most accomplished Canadian professional golfer in history.

CP ambassador Lorie Kane of Charlottetown, P.E.I. will be in Ottawa competing in her record 30th and final career appearance as a player at the CP Women’s Open. A member of the Canadian Golf Hall of Fame and Canada Sports Hall of Fame, Kane made her debut at Canada’s National Women’s Open Championship in 1991 and has played in each of the 29 tournaments since.

“The field is set, and we are extremely proud to the welcome the world’s best players back to our Nation’s Capital for the 48th playing of the CP Women’s Open,” said Ryan Paul, Tournament Director of the CP Women’s Open. “After two years of cancelation because of the pandemic, we know that Canadian golf fans and event enthusiasts are excited to join us at the Ottawa Hunt & Golf Club for the celebrated return of the LPGA Tour to Canada.”

The final four exemptions into the 2022 CP Women’s Open will be awarded on Monday, August 22 at the Monday Qualifier played at The Marshes Golf Club.

A full field list of players confirmed to compete in the 2022 CP Women’s Open is available online here.

2022 CP WOMEN’S OPEN TICKETS
One of Canada’s premier annual sporting events, the CP Women’s Open features miles of front row seating for golf fans to experience Canada’s lone stop on the LPGA Tour. General admission tickets, starting at just $20 for early week access, provide access to the grounds to get an up-close look at the stars of the LPGA Tour. Tournament rounds for Thursday, Friday and Saturday are just $50; a Sunday final-round ticket is $60; and a weeklong, fully transferable ticket is $120. A specially priced youth ticket (13-17 years old) is also available while juniors aged 12-and-under gain FREE grounds admission all week long. A full list of ticket packages and pricing is available online at www.cpwomensopen.com/tickets.

CP HAS HEART CHARITY CAMPAIGN TO BENEFIT THE CHEO FOUNDATION:
Canadian Pacific and Golf Canada are proud to support the Children’s Hospital of Eastern Ontario (CHEO) Foundation as the primary charitable beneficiary for the 2022 Canadian Pacific Women’s Open. Among the charitable engagements tournament week will be the Birdies for Heart hole on no. 15 at Ottawa Hunt with $5,000 donation made for every birdie made on the hole during the four rounds of the competition. In addition, CP is also proud to support a community beneficiary in the Perth and Smiths Falls District Hospital Foundation in support paediatric cardiac care. In the nine years of CP’s title sponsorship of the CP Women’s Open, more than $13 million has been raised to support children’s heart health in Canada.

CP WOMEN’S OPEN BROADCAST:
The 2022 CP Women’s Open will feature four days of domestic and international television broadcast coverage including Canadian broadcast partner TSN as well as international coverage on GOLF channel. For the first time ever, the CP Women’s Open will also be broadcast on US network television with Sunday’s final round coverage on CBS. A full schedule of TV Times and on course activities can be found at www.cpwomensopen.com