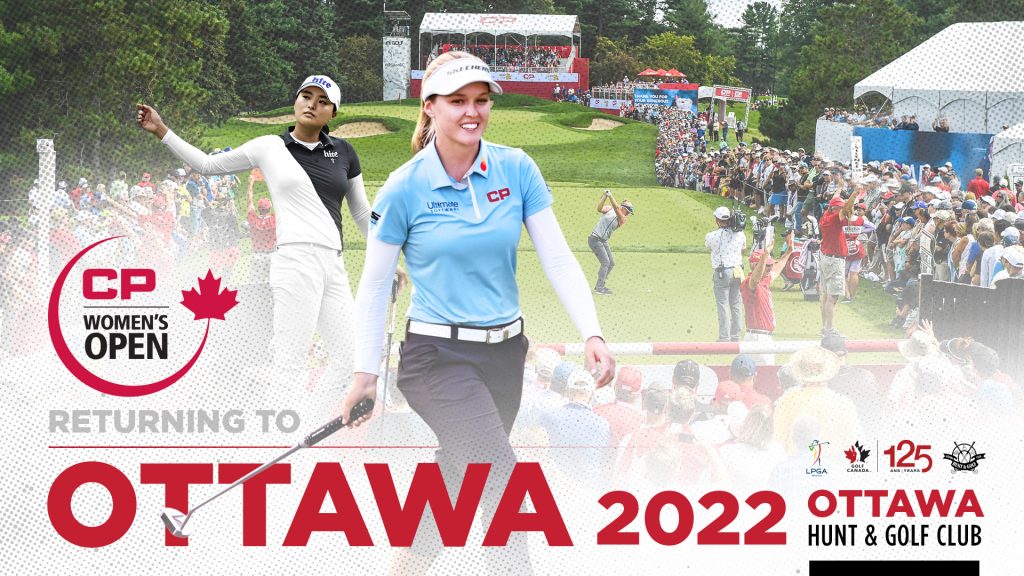 Championship will mark the fourth occasion the vaunted club will host the stars of the LPGA Tour; Canada’s Women’s Open returns to Ottawa for the fifth time

Through Canadian Pacific’s community investment program, CP Has Heart, the event will once again be making a significant contribution to pediatric cardiac care in the host community

OTTAWA (Golf Canada)– The stars of the LPGA Tour will once again head to the nation’s capital as Golf Canada and Canadian Pacific (CP) have announced the 2022 CP Women’s Open will return to the Ottawa Hunt and Golf Club.

The 2022 edition of the CP Women’s Open will be held August 22-28 and will mark the championship’s fifth visit to the nation’s capital, as well as the fourth visit to Ottawa Hunt and Golf Club, which previously hosted in 1994, 2008 and 2017. Canadian star Brooke Henderson from nearby Smiths Falls, Ont. will be a power draw once again as the nine-time LPGA Tour winner is an honorary member of Ottawa Hunt.

“We are extremely thrilled and enthusiastic for the return of the CP Women’s Open to Ottawa and the Ottawa Hunt and Golf Club in 2022,” said Laurence Applebaum, Golf Canada’s CEO. “The CP Women’s Open always receives terrific community support, but when we’re in Ottawa that backing is intensified. With our 2017 event in Ottawa for Canada’s 150 celebration and the excitement around Brooke competing so close to home, we set records for attendance, volunteer enrollment and left a meaningful charitable contribution. I’m certain the community will embrace all facets of the event when the stars of the LPGA Tour return to Ottawa.”

Through its CP Has Heart campaign, CP will once again be making a significant charitable donation to the host community. In the first six years of CP’s title sponsorship of the event, more than $10.7 million has been raised in support of children’s heart health across Canada.

CP’s community investment program has proven itself an award-winning initiative, earning the CP Women’s Open Gold Driver Awards for Best Charity & Community Engagement among all LPGA Tour events in 2017 and 2019.

“Through terrific events like the CP Women’s Open we’re able to shine a spotlight on local heart charities that make a big impact in their communities,” said CP President and CEO, Keith Creel. “Together, with all involved with the event, including our CP Golf Ambassadors Brooke Henderson and Lorie Kane, we look forward to raising money for a worthy cause and leaving a lasting charitable legacy in Ottawa through CP Has Heart.”

The announcement of Ottawa as the 2022 host city is the core of a partnership between the City of Ottawa, Ottawa Tourism and Golf Canada.

“It is great news that Golf Canada and CP have decided to return to Ottawa in 2022 for the CP Women’s Open at the Ottawa Hunt and Golf Club,” said City of Ottawa Mayor Jim Watson. “The tournament was a major success in 2017, attracting a record number of fans and putting Ottawa on the map as a fantastic golf destination. We look forward to, once again, welcoming the best talent from across the world for this exciting event in 2022.”

“Ottawa Tourism looks forward to welcoming the CP Women’s Open back to Canada’s Capital in 2022 and to hosting the stars of the LPGA once more at the Ottawa Hunt and Golf Club,” said Ottawa Tourism President and CEO, Michael Crockatt. “We thank Golf Canada for choosing to return to Ottawa for this prestigious event which will build on the success of the 2017 CP Women’s Open. We will show off the best of our city to the athletes and spectators and are honoured to bring this exciting event once more to the passionate golf community in Ottawa”.

More than 50,000 people attended the event in 2017, where Sung Hyun Park earned a two-shot victory at Ottawa Hunt as part of an amazing season that saw her capture several LPGA Tour awards, including Louise Suggs Rolex Rookie of the Year, Rolex Player of the Year and the Season Money Title.

The 18-hole championship course that will challenge the world’s best women golfers in 2022 was originally crafted by famed architect Willie Park and redesigned by international course designer, Dr. Michael Hurdzan prior to the 2017 event.

Gino Picciano, President of the Ottawa Hunt and Golf Club Board of Directors recalls how the club and the community embraced the tournament in 2017 and anticipates it doing so once again in 2022.

“We are delighted to have the opportunity to host the prestigious CP Women’s Open again in 2022 and welcome the top players in the world, including our own honorary member Brooke Henderson,” said Picciano. “Hosting the world-class event provides us with another opportunity to showcase our club as a challenging test and one of the premiere golf experiences in all of Canada.”

For CP Women’s Open Tournament Director Ryan Paul, a return to the Ottawa Hunt and Golf Club is reason for excitement given the event’s past success in the nation’s capital.

“The City of Ottawa and Ottawa Hunt have hosted some of the most memorable and successful CP Women’s Opens in history,” said Paul. “The response from LPGA Tour players as well as golf fans, volunteers and community supporters has always been tremendous and with two years of runway, we have the opportunity make the return of our National Open to Ottawa in 2022 very special.”

The CP Women’s Open consistently draws one of the strongest fields in women’s golf vying for the largest purse (US $2.35 million) on the LPGA Tour aside from the five majors and CME Group Tour Championship.

Due to continued travel and border restrictions related to the COVID-19 pandemic, the 2020 CP Women’s Open at Shaughnessy Golf and Country Club in Vancouver was postponed until 2021. Shaughnessy and the province of British Columbia will now host the event August 23-29, 2021.

First conducted in 1973, Canada’s Women’s Open Championship has allowed the brightest stars of the LPGA Tour to shine on Canadian soil and has inspired the nation’s next generation of female golfers.

Information regarding tickets, volunteer opportunities and corporate hospitality for the 2021 and 2022 CP Women’s Opens will be available online at www.cpwomensopen.com at a later date.