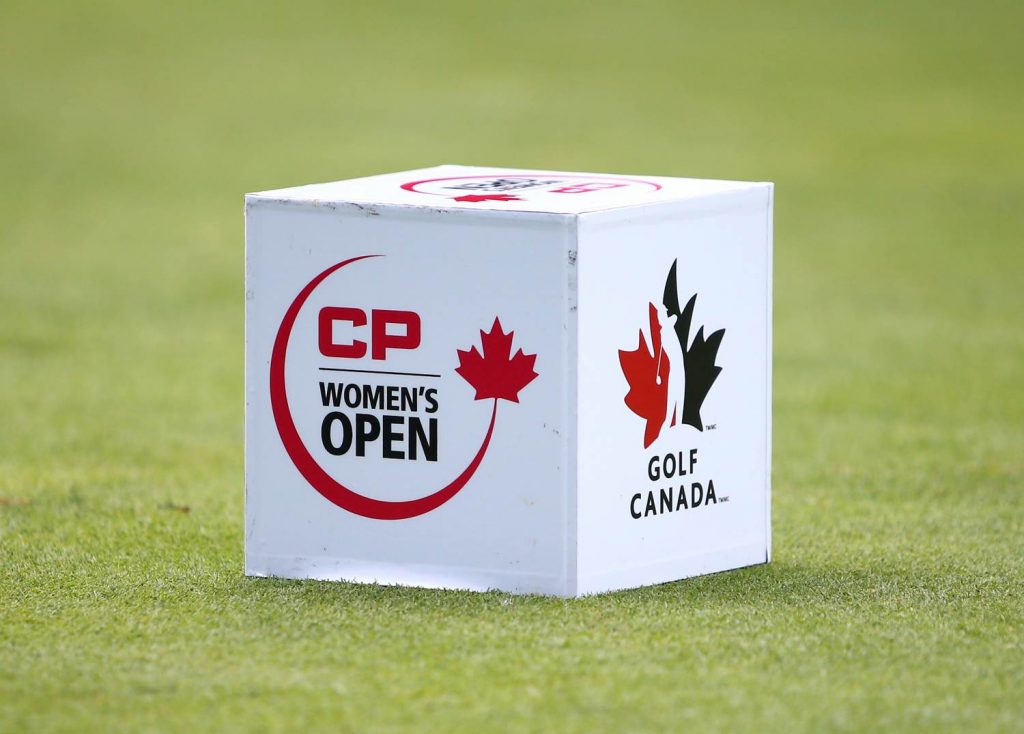 AURORA, CANADA - AUGUST 22: Tee Marker on the 15th tee during the first round of the CP Women's Open at Magna Golf Club on August 22, 2019 in Aurora, Canada. (Photo by Vaughn Ridley/Getty Images)
Golf Canada

2021 CP Women’s Leadership Summit will be hosted as a virtual experience focused on audience empowerment and world-class guest speakers.

VANCOUVER – Due to logistical challenges and continued border restrictions related to the ongoing COVID-19 pandemic, Golf Canada, title sponsor Canadian Pacific (CP), and the LPGA Tour have announced that the 2021 CP Women’s Open, scheduled for August 23-29, 2021, at Shaughnessy Golf and Country Club in Vancouver, has been cancelled.

Golf Canada had been working with local, provincial, and federal government health officials towards a comprehensive health operation plan for the tournament. With a decision timeline established, Golf Canada engaged a number of stakeholders to navigate the impact of current provincial restrictions as well as federal quarantine measures in effect, given the number of players and event personnel required to cross the border for the event.

Despite the disappointment of cancelling the 2020 and 2021 events, Golf Canada and CP have confirmed that Shaughnessy Golf and Country Club will pivot to host the 2023 CP Women’s Open, August 21-27, 2023. Both the Province of British Columbia and Sport Hosting Vancouver have already confirmed their commitment to support Canada’s National Women’s Open Golf Championship in its return to British Columbia.

CP also confirmed that they have extended their partnership with Golf Canada an additional year through 2024 which includes title sponsorship of the CP Women’s Open.

“Together with CP, the LPGA Tour, and our friends at Shaughnessy, we share in the deep disappointment of the players, volunteers, partners, and golf fans with the cancellation of the 2021 CP Women’s Open,” said Golf Canada CEO Laurence Applebaum. “Even with our extensive health and safety plan, we continued to face a number of significant logistical challenges that led to this unfortunate decision for a second year. As we focus on moving forward, I want the thank Shaughnessy Golf and Country Club and the Musqueam First Nation as well as the Province of British Columbia and Sport Hosting Vancouver for their swift decision to get behind the event coming back in 2023 and we know that it will be an incredible showcase when we bring the world’s best golfers back to Vancouver. I also want to thank CEO Keith Creel and the entire team at CP for their continued partnership and meaningful support of Canadian golf.”

“CP is committed to leaving a positive impact on the communities that host the CP Women’s Open, and we look forward to bringing the tournament back to Vancouver in 2023,” said Keith Creel, CP President and Chief Executive Officer. “We now set our sights on bringing the world’s best golfers to Ottawa in 2022 and continue our giving legacy in that community.”

CP’s various charitable activities over the past two years have helped BC Children’s Hospital and Royal Inland Hospital raise over $2 million through different matching programs. BC Children’s Hospital, the primary partner, will use the funds for a fleet of new cardiac ultrasound machines, research, and support for a catheterization program and two new fellowships. Royal Inland Hospital, the community partner in Kamloops, will use the funds to redevelop and vastly improve the cardiac department of the hospital. CP continues to work with these charity partners to raise even more funds.

Among the contributing factors to the 2021 cancellation was the continued uncertainty around international travel restrictions and quarantine requirements that made it most difficult to move forward with the Canadian event.

“We are so grateful to CP and Golf Canada for their continued support of the CP Women’s Open and the LPGA Tour,” said Ricki Lasky, Chief Tournament Business Officer for the LPGA. “While we share in this disappointment, we have no doubt that Shaughnessy, CP and Golf Canada will provide our players with an amazing experience when we are together in 2023, and we look forward to working with these partners for years to come.”

The 2023 CP Women’s Open at Shaughnessy Golf and Country Club will mark the sixth time the province of British Columbia has hosted Canada’s Women’s Open Championship, with the last time being in 2015 at The Vancouver Golf Club, where Lydia Ko won her third CP Women’s Open title.

For Shaughnessy Golf and Country Club Board of Directors and membership, pivoting to host the 2023 CP Women’s Open allows the club and its host volunteer committee to refocus on what is sure to be celebration of golf when the LPGA Tour returns to Vancouver.

“While we are disappointed to be postponing the CP Women’s Open once again due to the COVID-19 pandemic, we will refocus our efforts and look forward to working with the Musqueam First Nation, Golf Canada, CP, the City of Vancouver, our fantastic group of volunteers, and other partners in preparation of hosting the best players in the world at Shaughnessy in 2023,” said Brian Mossop, General Manager and C.O.O. at Shaughnessy.

The rescheduled return of the LPGA Tour to Vancouver in 2023 will be proudly supported by both the Province of British Columbia as well as Sport Hosting Vancouver. With a global audience reach of over 500 million households across 170 international markets, both bodies are getting behind one of Canada’s signature sports entertainment properties as part of their revitalized tourism platform moving forward.

“I recognize how devastating it must have been for organizers to once again have to cancel the 2021 CP Women’s Open due to the continuation of Federal travel restrictions,” said Melanie Mark, Minister of Tourism, Arts, Culture and Sport. “However, with the majority of adults vaccinated and COVID-19 case counts steadily declining, I feel more optimistic than ever about B.C.’s restart plan and our ability to welcome the world back to our province once again. I would like to thank the entire CP Women’s open community for your unwavering commitment to the power of sport.”

“As a host destination we are thrilled for the opportunity to re-secure and host the 2023 CP Women’s Open,” said Michelle Collens, Director, Sport Hosting Vancouver. “Major events like the CP Women’s Open will be a critical part of our tourism and economic rebuild, making this great news for our future event portfolio, welcoming back international visitors and fans to Vancouver.”

With the 2021 event officially cancelled, tournament officials with Golf Canada and CP will turn their focus to the 2022 CP Women’s Open, which was previously confirmed to be hosted at Ottawa Hunt and Golf Club August 22-28, 2022.

The fourth annual CP Women’s Leadership Summit, which was scheduled to take place on August 24 as part of CP Women’s Open tournament week, will be replaced by a digital experience focused on audience empowerment and inspiring guest speakers. Full details including a schedule and guest speakers will be released in the coming weeks. The Summit, which is a celebration of business leaders, influencers, and community champions, will continue to be part of the CP Women’s Open in 2022 and beyond.

Golf Canada, CP and the LPGA Tour would like to thank golf fans across the nation in addition to the many corporate partners, ticket, and hospitality purchasers, as well as the countless volunteers for their continued support through this unprecedented time