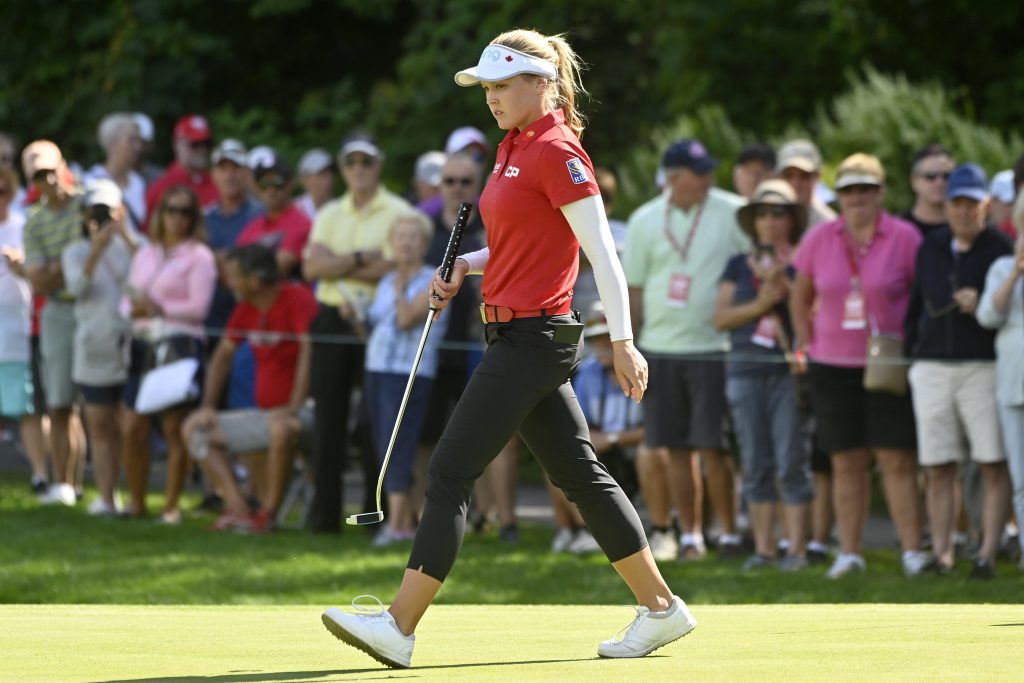 AURORA, Ont. – After a sizzling Saturday 65 that included a back-nine 29, Brooke Henderson is just two shots back heading into the final round of the CP Women’s Open at Magna Golf Club, as she looks to defend her title.

Henderson will be in Sunday’s final group with South Korea’s Jin Young Ko, the No.1 player in the world, and 54-hole leader Nicole Broch Larsen.

Henderson had a tough start to her third round, as the 2018 CP Women’s Open champion was 2-over through six holes. She made three birdies in a row on holes 8 thru 10 to get back into red figures on moving day before going full steam ahead after receiving a high five from a young fan.

“It was a little bit of a struggle there,” Henderson said. “I felt like I was playing decent golf. Just wasn’t really going my way. Then on the seventh green a little boy gave me a high five and then he continued the rest of the round. At the time he did kind of cheer me up a little bit. I think I tried to get back to even on the front nine. Going to the eighth tee, I was trying to just make two birdies, get it back to even and then see if I could go really low on the back, which I did.”

She said she couldn’t remember the last time she was in the 20’s for nine holes. Henderson shot 36-29 on the day and she’s left herself within striking distance of the co-leaders, as Henderson is just two shots back going into Sunday’s final-round.

Henderson said the putter was the key to her success Saturday, as she needed just 26 putts to card her 65.

“It was nice to have my putter on my side,” she said. “To be honest, my putter has been bailing me out a lot this week. Today I made a lot of putts. I felt really confident with it. Felt like my speed was good. As long as I was seeing the line they seemed to be falling. It was just a lot of fun out there.”

Ko, who leads the Rolex Player of the Year ranking and the Race to CME Globe after winning three times already this year – including two majors – matched Henderson’s 65 on Saturday.

At 18-under, she has a chance to win for the fourth time on the LPGA Tour in 2019. Ko, who works with Canadian instructor Gareth Raflewski on her short game, credited the work she’s done with him as the key to her success this year.

Ko was bogey-free on Saturday with four birdies on her front nine and three more on the back nine. She hasn’t made a bogey all week and said she was buoyed by the support of the South Koreans in the crowd.

“A lot of Koreans, out there, so they were cheering me up every hole, every shot,” said Ko. “I enjoyed (today) and played good,” “I had great game. I got birdies (on) every par five today, so that is good for me.”

Meanwhile, Broch Larsen, last held a share of an overnight lead on the LPGA Tour following the second-round of the 2017 CP Women’s Open in Ottawa. She slid down the leaderboard over the weekend and said she learned a lot about being in that position. This year, she held strong with a 6-under 66 in round 3, her third-straight round with that score.

“I’ve shot three 66s, so I don’t know if I should change my game plan too much,” Larsen said.