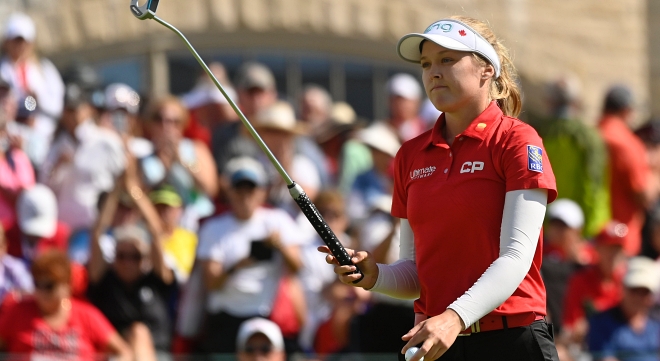 Henderson, who is looking for her third LPGA Tour win of 2019, trails Nicole Broch Larsen by just three shots, who leads at 12-under through two rounds.

Larsen has a one-shot lead over world No. 1 Jin Young Ko. Ko already has three victories this season and has a sizable lead in the Rolex Player of the Year race.

Henderson made two birdies on her first nine holes Friday and added another on the back-nine. She didn’t have as clean a day off the tee as Thursday when she shot a 6-under 66 – hitting only eight of 14 fairways.

Winds at Magna Golf Club picked up Friday, but Henderson escaped unscathed with a bogey-free second-round.

“No bogeys is always great, so that’s a good feeling,” said Henderson. “I feel like I played pretty solid. Unfortunately, I didn’t get some of those closer looks for birdie. But, I still feel like I hit a lot of greens and my putting was good enough.”

At 9-under through two rounds, Henderson is tied with China’s Yu Liu and Thailand’s Pajaree Anannarukarn.

On Red & White Day at the CP Women’s Open Henderson – clad in both colours, of course – had a throng of loyal Canadian followers hanging on to her every move at Magna Golf Club. She said the crowd support has been ‘amazing’ so far.

“So many people (here) early in the morning and late at night,” Henderson added. “It’s been awesome. It’s pretty special to have all these people out there following you around and cheering you on. Sometimes you just see a little kid smiling at you and wanting a high-five, and it takes you on out of the moment for a second. I feel like that’s good. Kind of brings you back to real life I guess you could say. They just have so much belief in you and I think that kind of inspires me a little bit.”

Henderson was one of two Canadians to make the cut, as AC Tanguay finished at 4-under and is T-25 heading into the weekend. After a tough stretch to open her round Friday – she went bogey-double-double on holes 4 thru 6 – Tanguay managed to right the ship.

“I didn’t feel like I did anything wrong. It just went wrong. It went south real quick,” she admitted. “But I knew I was hitting it well and really in a good place. I built so much momentum on the back nine and felt so much better over the ball today than yesterday, so I think I’m going to build on that for the weekend.”

Broch Larsen, meanwhile, said she played similarly to Thursday – where she shot another 66.

“I’m not flushing it, but I’m just playing kind of steady and getting away with my bad shots,” she said. “Today I made a couple good putts out there, which helps.”

Broch Larsen, of Denmark, was the 2015 Ladies European Tour Player of the Year. She hasn’t yet won on the LPGA Tour, but did win the 2016 Symetra Tour Championship to earn her LPGA Tour card for 2017.

The last time Larsen held the lead on the LPGA Tour was two years ago at the CP Women’s Open in Ottawa. She said she learned a lot from being in that position then.

“I feel like I’m more confident in this position now than I was two years ago even though I haven’t been here for a while,” she explained. “I’m just trying to play as free as possible.”

Broch Larsen admitted she had a “terrible” warm-up on the driving range Friday, overthinking everything. She said was having trouble finding the right swing, but she wanted to go out and commit to her shots and see where it took her.

Where it took her, through two rounds at the CP Women’s Open, was the top of the leaderboard.

The cut fell at 1-under with 71 players finding the weekend.

Although it wasn’t the LPGA Tour debut Michelle Liu would have wanted score-wise, the experience for the 12-year-old couldn’t have been better.

Liu (81-82) said she had ‘a lot of fun’ being able to tee it up alongside the best in the world. She was grouped with 2019 Augusta National Women’s Amateur winner Jennifer Kupcho, a tournament Liu said she’d like to try to win one day.

“I think it’s great that I get to play with such great players,” said Liu. “Hopefully, I learn something from them.”

No amateurs, including Liu, made the cut at the CP Women’s Open. American Brianna Navarrosa – the 2019 Canadian Women’s Amateur champion – had the best finish out of the  six amateurs in the field at 3-over par in her first-ever LPGA Tour event.

Liu said the highlight of the week was her walk up the 18th fairway to a chorus of cheers from the legion of fans she made at Magna Golf Club. The biggest challenge, she said, was with her mental game.

“I’m really glad that I’m able to like experience this challenge as an amateur and at such a young age,” Liu said. “I think being able to get this over with and make it an experience – it’ll really help me moving forward and in other tournaments, because now I it’s going to be pretty hard to play in a tournament larger than this one.”

The 2020 CP Women’s Open will be played at Shaughnessy Golf and Country Club, Liu’s home course in Vancouver. She said she’s already got that event circled on her calendar.

But first Liu, who goes into grade eight this September, will be playing a few local tournaments and then she’ll be off on a camping trip before school starts.  And what a good campfire story this week will make.