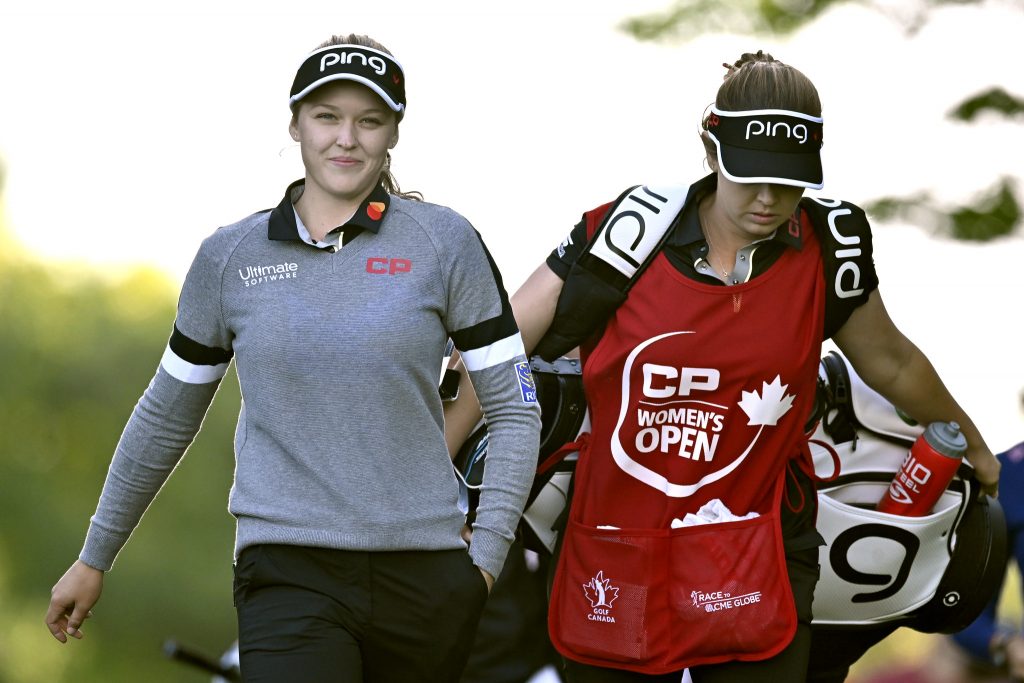 AURORA, Ont. (Golf Canada) – Annie Park leads the CP Women’s Open after the first round thanks to a 7-under-par 65, tied for her lowest opening-round score in relation to par on the LPGA Tour this season.

Park, from Levittown, New York – and who has a Canadian coach and trainer – made seven birdies and an eagle Thursday at Magna Golf Club. The winner of the 2018 ShopRite LPGA Classic presented by Acer said she was trying to break her own personal record of 9-under, but made a late bogey on the par-3 17th to drop down to 7-under for the day.

Still, she said it was a good round and leaves her on top of the leaderboard going into Friday.

Park’s 7-under 65 set the competitive course record at Magna Golf Club, and she comes into the week having made eight-straight cuts and notching two top-10 finishes in that stretch.

She said her plan is straightforward enough going into the second round.

“Just get a good dinner, have a good rest, and get back to it bright and early tomorrow,” she said. “The course is in great shape… I think it’s one of the best courses we’ve played. It’s just a real treat this week.”

While Park ended up on top of the leaderboard Thursday, it was a pair of Canadians who made the most noise at Magna Golf Club as both Brooke Henderson and Anne-Catherine Tanguay finished at 6-under, just one shot back of the lead.

Henderson, the defending champion, made just one bogey and had seven birdies Thursday.

She credited a hot putter for her success, as well as a solid day of ball striking, as Henderson hit 12/14 fairways and 16/18 greens in regulation.

“My putter was really hot, especially for me today, which was really exciting,” said Henderson, whose 66 matched her opening round from the 2018 CP Women’s Open at Wascana Country Club.

“I just tried to hit a lot of fairways, give myself good shots into the green, give myself some good looks at birdies and felt look I made quite a few birdies on the front nine. That kind of calmed my nerves a little bit. Kind of got the feeling that I could go low possibly today,” Henderson continued. “Then everything just sort went right. I had one bogey, but other than that, I felt like everything was in good shape.”

Henderson’s 6-under score held the early lead through most of the day.

While she got off to a great start, she knew there was still much golf to be played and she had a feeling her lead wouldn’t hold up as the day went on. But, Henderson said she was happy with how she executed on her game plan.

“It’s nice to be in a position where I had a good round; everything seemed to go right for me,” said Henderson. “Hopefully I can continue to stick to my game plan, make a lot of birdies, and I would love to be in this position on Sunday.”

Henderson, from Smiths Falls, Ont., was also the low Canadian until Quebec City’s Tanguay fired a bogey-free 66 in the afternoon wave.

Tanguay’s 66 tied her lowest round on the LPGA Tour this season. It’s been four weeks since Tanguay last teed it up on the LPGA Tour and she said she put in some solid work with Golf Canada’s National Women’s Team head coach Tristan Mullally prior to teeing off this morning.

“We tweaked a few little things and it just paid off today,” she said. “I couldn’t have asked for anything better.”

Tanguay said the key to her round was being patient. She admitted her week has been quite busy so she had low expectations coming into Thursday’s opening round, but after building some momentum early in the round, she got into a nice groove.

“On the greens I felt like I was having a hard time picking up the speed early on in my round,” she said.  “But then the back nine just felt like I couldn’t miss with my putter. To be honest, it was really good. I was over the ball and I just kind of had this feeling it might go in.”

Tanguay and Henderson are tied for second with Nicole Broch Larsen, Pajaree Anannarukarn, and world No. 1 Jin Young Ko going into Friday.

Jin Young Ko has had a season for the ages on the LPGA Tour in 2019, and her fine play continued Thursday at the CP Women’s Open.

Ko, who has won three times this year including two majors (ANA Inspiration and the Evian Championship), shot a 6-under-par 66 Thursday at Magna Golf Club with six birdies and no bogeys.

Ko is the LPGA Tour’s only three-time winner in 2019 and leads the money list, the Race to the CME Globe and the Rolex Player of the Year lists.

After two weeks away from the LPGA Tour she said she felt refreshed and ready to go this week, even though she had a unique start to the tournament week.

Her caddie didn’t arrive until Wednesday night, so he saw Magna’s 18 holes for the first time during Ko’s round today. She hadn’t even seen the back nine prior to Thursday, but she still managed to make three birdies.

“I didn’t know about (the course),” said Ko. “But we had trust, and that’s why I played really good today. And I had really great fun with Lydia (Ko) and Brittany (Altomore). It was good.”