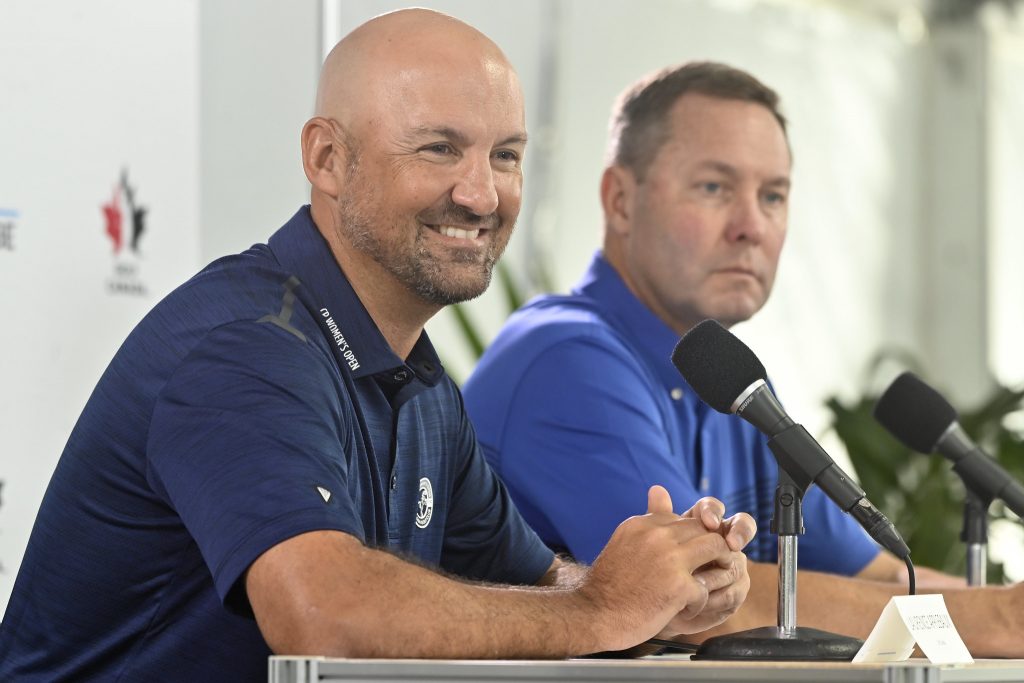 On Wednesday, Applebaum and LPGA Tour commissioner Mike Whan spoke with media, and the pair were full of praise for Canadian golf fans and tournament partners, so far this week.

“This is a week we’ve been looking forward to for a long time,” said Applebaum. “Ever since Brooke (Henderson) hoisted our national championship trophy a year ago at Wascana, we knew we’d be coming to a spectacular golf club (this year), with an amazing turnout for the week ahead, and we couldn’t be more excited to watch Brooke as well as all our 15 Canadians who are in the draw along with 96 out of the top 100 LPGA Tour players.

“We’re so thankful the LPGA Tour has made this such an important stop on their global tour.”

Whan, who played in the Championship Pro-Am Wednesday alongside Applebaum in a group with Golf Canada Young Pro Squad member Maddie Szeryk and Augusta National Women’s Amateur Championship winner Jennifer Kupcho, said the experience at the CP Women’s Open this week at Magna Golf Club has been nothing short of spectacular.

“This is elite. It has been elite for a long time,” Whan said of the CP Women’s Open. “I can just tell you from flying up here with some players, it’s a different feeling. People are excited before they get here. A lot of it is just they know Golf Canada does it right, but what they do here in terms of how they treat the players, how they treat the caddies, how they treat the fans, it’s unique and it sets itself apart, and as a result we get the best of the best every year.”

Applebaum says the success of the week can be traced back to the relationship between Golf Canada at Magna Golf Club, located just 30 minutes north of Toronto.

He calls the agreement one of the easiest in his tenure.

“This was the fastest, most efficient, most fun collaboration that I’ve had since I took the job for a new golf course to come on to the rotation,” said Applebaum. “Magna was always on our radar.”

Whan said he’s been impressed with Magna’s facilities, the tournament’s organization, and Canadian Pacific in particular.

“I haven’t been this excited to play in a Pro-Am in a long time,” Whan added. “It might be cool to be in Toronto (this week) but 170 countries will also be paying attention to what goes on here, so I really hope the fans come out and create the kind of atmosphere that Magna could really create.”

SHARP TO EMBRACE CANADIAN SUPPORT
As one of 15 Canadians teeing it up this week at the CP Women’s Open, Alena Sharp knows she has a great opportunity to play well in front of throngs of Canadian fans.  But she doesn’t have to do anything special to make them proud of her.

“I always was so nervous,” Sharp said of her first few times playing the CP Women’s Open. “I just wanted to go play well so badly. It’s like when you try and force something it never really works out very well,” “The last few years after the Olympics I had my best finish and played decent last year. I just realized that everybody is here and they’re cheering for you and they recognize you, but they’re proud of you. You don’t have to make them proud. They’re already proud.”

Sharp’s best finish in 2019 came at the Dow Great Lakes Bay Invitational, a team event where she was paired with Brooke Henderson. The pair tied for fifth that week and Sharp said while their relationship began as mentor-pupil, it has evolved into a nice friendship.

“I’m not shy to ask her about advice on things about a shot or something. We had a great time playing the team event. It was just really cool,” said explained. “The four of us – Sara and Brittany as well – we all get long really well and have a good time together. So it’s nice to have that on Tour.”

Sharp, who sits 50th on the 2019 Race to CME Globe, tees off at 9:05 a.m. on Thursday. Her best career CP Women’s Open result came at Priddis Greens Golf and Country Club in 2016, where she finished fourth.

PAST CHAMPIONS RETURN TO THE CP WOMEN’S OPEN
Eight past CP Women’s Open champions are set to tee it up this week at Magna Golf Club, led by defending champion Brooke Henderson.

Juli Inkster (who won in 1984) was in the field but withdrew Wednesday citing a sore back.

This year marks the 10th anniversary of Pettersen’s victory. She is also playing for just the third time this season, as she gave birth to her first child in August of 2018.

“Obviously Canada has always been very kind to me in my golf game and I’ve had some great success,” said Pettersen of her return. “When I was thinking of how I can possibly prepare the best I can for (the Solheim Cup), playing here was very obvious choice, so I’m happy to be here.”

Henderson said, too, it’s always special to defend a title.

She’s become a bit of an expert playing well at events she had success at – she’s won the same event twice three times in her career.

“To be able to win on the LPGA Tour once is really cool. To come back next year and defend your title is really special I think and pretty unique. It doesn’t happen very often with these courses,” Henderson said. “I felt like I had a great game plan and I felt very confident; whereas this tournament we have moved around the courses ever single year, so that is a little bit different feeling coming into this week. But I think you still carry over a lot of positive energy and momentum from last year.”

LEVELWEAR AND GOLF CANADA ANNOUNCE PARTNERSHIP EXTENSION
Golf Canada and LEVELWEAR announced an agreement that will see LEVELWEAR extend their official apparel partnership with the National Sport Federation for golf through 2022.

The multi-year extension will continue LEVELWEAR’s support as Official Headwear and Apparel provider across a multitude of Golf Canada properties and championships. The LEVELWEAR brand will continue as the official headwear and apparel as well as the official volunteer uniform for several of Golf Canada’s properties including the RBC Canadian Open, the Canadian Pacific Women’s Open, Canadian Amateur Golf Championships and the World Junior Girls Championship.

“LEVELWEAR has become one of our most engaged partners and we are pleased to extend their meaningful commitment to Canadian golf across so many foundational pillars of our organization,” said Golf Canada CEO Laurence Applebaum. “The LEVELWEAR brand represents the highest quality performance for both serious and recreational golfers. Our robust partnership touches many levels of Canadian golf, from amateur to professional, and we are excited to continue working with their talented team.”

For LEVELWEAR, extending and deepening their brand alignment with Golf Canada was a natural evolution to grow a partnership that began in 2017.

“We are proud to be extending our partnership with Golf Canada and their many world-class golf programs, championships and golfer engagement platforms,” said LEVELWEAR President & CEO Hilton Ngo . “Supporting golf at all levels in Canada is a key priority and our collaboration with Golf Canada has done a tremendous job in elevating our brand with Canadian golfers nationally.”