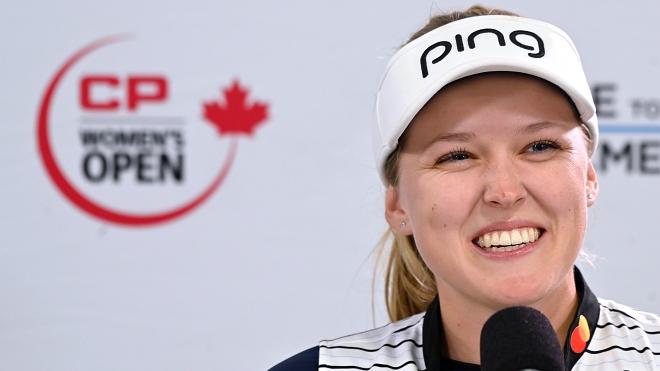 AURORA, Ont. – With the opening-round of the $2.25 million (US) CP Women’s Open less than two days away, tournament week at Magna Golf Club continues to showcase the finest in women’s professional golf.

Wednesday, August 21st is Championship Pro-Am Day. The event will see professional golfers take to the course to entertain a field of amateurs as part of the LPGA Tour’s ‘Nine and Nine’ Pro-Am format, where amateur participants will play nine holes each with a pair of LPGA Tour professionals.

“It’s amazing. I played nine holes yesterday and nine this morning and the course is in incredible condition. I think it’s going to be a lot of fun for all of us girls to go out there and probably try to make a lot birdies and shoot low scores,” said Henderson.

Henderson, who earlier this year defended her title at the LOTTE Championship in April and won the Meijer LPGA Classic for Simply Give in June (her ninth LPGA Tour title), is now, at 21, Canada’s winningest golfer on the LPGA or PGA Tour.

“To have won the CP Women’s Open last year is probably the highlight of my career so far,” said Henderson. “Just being with all the great fans from the nation and just having so much attention on me and then still being able to perform as well as I did and execute those shots under pressure was really exciting for me.”

Magna Golf Club, Henderson said, has been a pleasure to play. Mike McMahon, the head golf professional at the club, has walked around with Henderson both Tuesday and Monday and has provided her with some tips. She said ball striking will be key this week.

“The fairways are pretty generous and the greens are very large. I think if you can be really precise on approaches with your ball striking you’ll hit it to the right slopes, right quadrants on the green. That’ll be really important to give yourself a good look at birdie,” she said. “It’s in amazing shape. It’s going to be a lot of fun. I do think if the conditions stay as they are right now there will be some low scores. I think that will be fun for fans as well.”

Every year since 2016 Henderson has won twice on the LPGA Tour and has ascended as high as fifth on the Rolex Rankings this year. But still, the CP Women’s Open is a highlight on her calendar.

Henderson is one of 15 Canadians to play in this year’s CP Women’s Open, including Lorie Kane of Charlottetown, PEI – making her record-setting 29th appearance.

12-YEAR-OLD MICHELLE LIU TO MAKE ANTICIPATED CP WOMEN’S OPEN DEBUT
Age is just a number, but this week at the CP Women’s Open, it’s an important one.

At just 12 years old, she is the youngest person to ever tee it up in Canada’s national open.

“I feel like I’m getting pretty famous,” said Liu. “I think it’s a new experience for me, so I would say that’s definitely pretty cool.”

Liu said her big goal this week was to just play well and enjoy herself.

“I definitely do hope for a lot. I know there are a lot of great players here in the field. I think it was 96 out of the top 100 players, so I definitely say (making the cut is) going to be pretty hard,” she said. “I hope for a lot and I expect a little bit less.”

Liu, who is entering grade eight, said she also plays volleyball and basketball when she’s not golfing. Art is one of her hobbies – she has a web comic with a few friends – and she started a foundation called the Hope for Girls Foundation to pay for school supplies for girls in the Northern part of the Guangzhou province in China.

But while she’s fairly busy off the golf course, this week is about what’s happening on the golf course for Liu, who has already teed it up with some LPGA Tour winners including Christina Kim, and practiced alongside her idol, fellow Canadian Brooke Henderson.

“I’m looking forward to being able to play with even more great players, especially in like the environment of a professional golf tournament,” said Liu. “I think it’s definitely going to be a challenge for me and my mental game to be able to focus and like keep my mind on each and every shot.”

PAIRING AND START TIMES – ROUNDS 1&2
Pairings for the first and second rounds of the 2019 CP Women’s Open are available here.

CP WOMEN’S LEADERSHIP SUMMIT A SUCCESS
Canada and Canadian Pacific were proud to conduct the second annual CP Women’s Leadership Summit on Tuesday, August 20 at the Sheraton Parkway Toronto North in Richmond Hill, Ont., as part of the weeklong excitement of the 2019 CP Women’s Open.

The CP Women’s Leadership Summit brought together like-minded businesswomen from across the country for a day of networking, empowerment and philanthropy. The Summit also raised awareness for the CP Women’s Open, with attendees receiving access to the tournament during the week.

The keynote speaker Roberta Bowman, Chief Brand & Communications Officer of the LPGA, and was joined by LPGA Tour Professional Mariah Stackhouse for an athlete Q&A.

Rogers Sportsnet Central Co-Anchor Evanka Osmak was the emcee and panel moderator for the event.

BIRDIES FOR HEART
You can help fundraise for an upgraded Cardiac Operating Suite at SickKids by pledging a donation amount or per birdie for 2019 CP Women’s Open tournament play. Whenever a LPGA Tour player sinks a birdie on the 17th hole, your chosen dollar amount is donated to SickKids Foundation. For all donations made through Birdies For Heart, spectator support will be matched by CP. To participate, please click here.