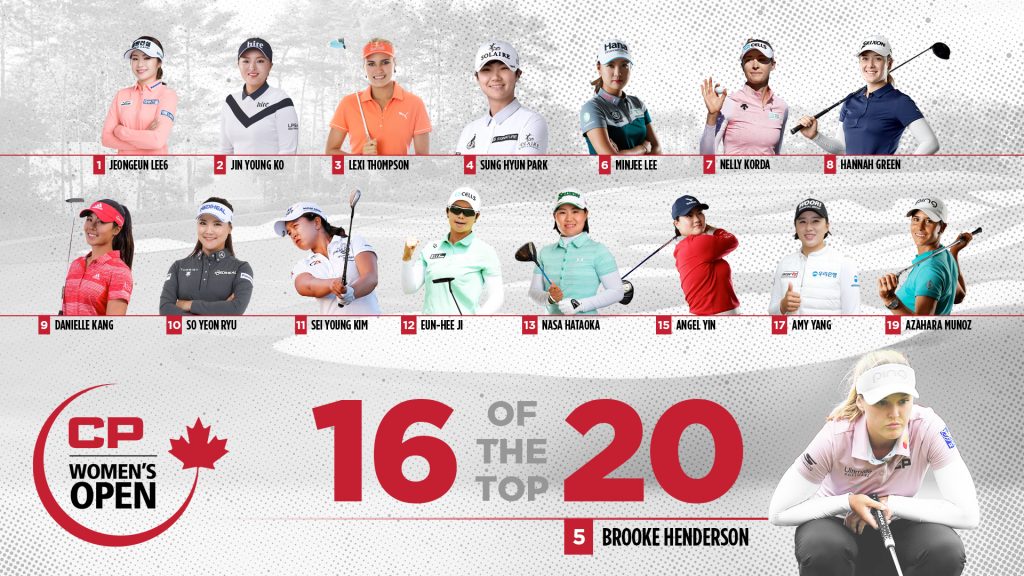 Aurora, Ont. – Golf Canada, in partnership with title sponsor Canadian Pacific (CP), has announced that many of the world’s top players have committed to compete in the 2019 CP Women’s Open from August 19-25 at Magna Golf Club in Aurora, Ont.

Leading the charge is defending champion and world no. 6 Brooke Henderson of Smith’s Falls, Ont. who made history at Wascana Country Club in Regina last year becoming the first Canadian since Jocelyne Bourassa 45 years earlier to win Canada’s National Women’s Open. Henderson, currently 5th on the 2019 LPGA Money List has won two LPGA Tour events in 2019 and her nine career LPGA Tour wins are the most for any Canadian professional golfer on the LPGA or PGA TOUR.

“Brooke winning the 2018 CP Women’s Open in historic fashion was an incredible moment for Canadian golf and there is a tremendous momentum leading into Magna Golf Club as we bring Canada’s National Women’s Open back to the Greater Toronto Area for the first time in nearly 20 years,” said CP Women’s Open Tournament Director Ryan Paul. “Our early player commitments are trending towards welcoming one of the strongest fields on the LPGA Tour that will deliver a spectacular world-class event.”

Canadians in the Mix:

Henderson also headlines the early list of Canadians set to compete at Magna Golf Club. She will be joined by Canadian Golf Hall of Fame honoured member and fellow CP ambassador Lorie Kane, a four-time winner on the LPGA Tour. Kane will be competing in Canada’s National Women’s Open Championship for a record 29th consecutive time. Other Canadians include LPGA Tour members Alena Sharp of Hamilton, Ont., Brittany Marchand of Orangeville, Ont., Jaclyn Lee of Calgary and Anne-Catherine Tanguay of Quebec City. The six Canucks will be joined by several more Canadian professional and amateur golfers to be confirmed in the coming weeks.

The 2019 CP Women’s Open will mark only the second time since 2001 (won by golf legend Annika Sorenstam at Angus Glen Golf Club in Markham) that Canada’s National Women’s Open has been contested in the Greater Toronto Area.

CP Has Heart Charity Campaign to Benefit the SickKids Foundation:
Canadian Pacific  and Golf Canada are proud to support SickKids Foundation in Toronto as the primary charity partner for the 2019 Canadian Pacific Women’s Open. Funds raised through the CP Women’s Open will go towards renovating a Cardiac Operating Suite at SickKids. In addition, CP is also proud to support the tournament host community in 2019 with a donation of $250,000 to Southlake Regional Health Centre in Newmarket, Ont. to support paediatric cardiac care. In the five years of CP’s title sponsorship of the CP Women’s Open, $8.5 million has been raised to support children’s heart health in Canada.

Golf Canada and Canadian Pacific will host the second annual CP Women’s Leadership Summit on Tuesday, August 20 at the Sheraton Parkway Toronto North in Richmond Hill, Ont. as part of the weeklong excitement of the 2019 CP Women’s Open. The CP Women’s Leadership Summit will bring together like-minded businesswomen from across the country for a day of networking, empowerment and philanthropy. The Summit will also raise awareness for the CP Women’s Open, with attendees receiving access to the tournament during the week.

The business panel of the summit will consist of three businesswomen at the top of their respective fields. Maeghan Albiston, Assistant Vice-President of Investor Relations & Pensions at CP, Anne Simard, Chief Mission & Research Officer of the Heart and Stroke Foundation and Jennifer Tory, Chief Administrative Officer of RBC will all be part of the panel. A new addition to the leadership summit in 2019 is the athlete panel which will feature four accomplished Canadian Olympians—speed skater Anastasia Bucsis, soccer goalkeeper Karina Leblanc, multi-sport star Georgia Simmerling and two-time ice hockey gold medalist Natalie Spooner. Roberta Bowman, Chief Brand & Communications Officer of the LPGA, will join the CP Women’s Leadership Summit as the keynote speaker while Rogers Sportsnet Central Co-Anchor Evanka Osmak will act as the emcee and moderator for the event.

KIDS 12-AND-UNDER GET IN FREE…
Golf Canada and CP are committed to offering a fan friendly, family event with the CP Women’s Open. To introduce more juniors to the sport, children aged 12-and-under get FREE admission to the CP Women’s Open for the entire week.