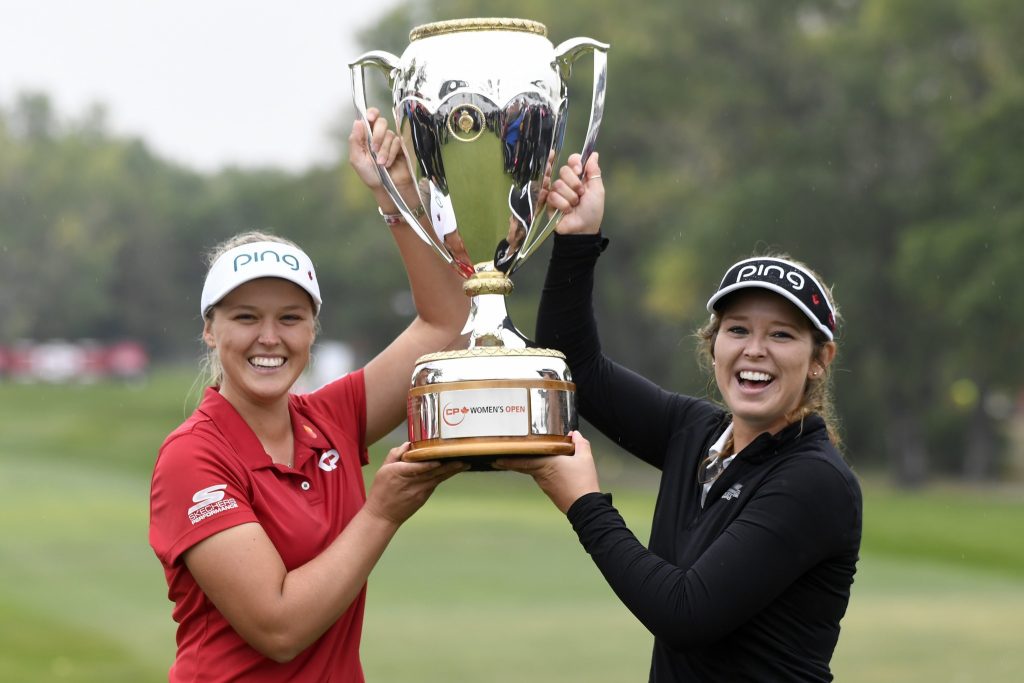 REGINA, Sask. (Golf Canada) – For the first time since 1973, a Canadian has won her country’s national golf championship. In front of hordes of fans screaming her name and singing O Canada, Brooke Henderson shot a final-round 65 and earned a decisive four-stroke win over Angel Yin at Regina’s Wascana Country Club.

Lifted all week by the adoring Canadian fans, Henderson carded birdies at five of her closing eight holes. While the win was at hand, Henderson didn’t feel it was truly hers until she put her approach at No. 18 to just 3 feet, ultimately sealing the victory.

“I know that might sound a little silly because I did have a few-shot lead, but anything can happen down the stretch,” said Henderson, who became the first Canadian since Jocelyne Bourassa in 1973 to win the CP Women’s Open. “I was pretty nervous. This was a big deal for me. To be able to hit that shot in and finally know that it was basically over was incredible, and I feel like that was the first time all day that I could really smile and really enjoy everything to its fullest.”

HENDERSON LOOKS ABOVE FOR WINNING SUPPORT
It’s certainly been a long summer for Brooke Henderson and her family. In early June, Henderson’s maternal grandfather, Robert Moir, passed away after a battle with cancer, causing the Canadian star to withdraw from the U.S. Women’s Open after 18 holes to rush to his side. Then her paternal grandfather, Clem Henderson, died in early August while she was in England for the Ricoh Women’s British Open.

Henderson is normally reserved on the golf course and her on-course victory festivities tend toward quiet celebrations. But the win in Canada, and all the weight lifted off her petite shoulders, brought tears to her bright blue eyes.

“I think just all the hard work that my family has put into this, my dad and my coach, my mom, my best supporter, and my sister, who’s also my caddie,” said Henderson. “This was a big dream and a big goal for all of us, and I think it’s just a cumulative effort of all of us that gave me the chance to be able to lift that. I mentioned I thank God for this, for this win and just the many opportunities that I’ve been given. My grandfathers have passed away this summer, and I really think they were helping me today.”

IN HER WORDS – HENDERSON ON WHAT IT MEANS TO WIN IN CANADA
“I definitely feel like it was meant to be this week. I knew it wasn’t over until basically 18, but I just had that good feeling. It’s just amazing and a dream come true.”

BOURASSA HAPPY TO SHARE TITLE WITH HENDERSON
With her win today at Wascana, Brooke Henderson joined her countrywoman Jocelyne Bourassa as the only Canadians to win the CP Women’s Open. Bourassa took the title at the inaugural event in 1973, then called the La Canadienne, for her only LPGA Tour victory. Bourassa served as LPGA treasurer in 1974-75 and from 1980-2000. She worked as the executive director of the Du Maurier Classic, the name under which the CP Women’s Open was played as a major from 1979-2000.

“Together with golf fans and Canadians from coast to coast, I want to pass along my most sincere congratulations to Brooke Henderson on her historic win at the 2018 CP Women’s Open. It’s been 45 years since Canada celebrated a homegrown champion Women’s Open Championship and I couldn’t be prouder today to pass that incredible honor to Brooke Henderson. My win in 1973 in front of so many Canadian golf fans was the most special moment of my golfing career and I can image how satisfying this accomplishment must feel for Brooke and her family today. She is an incredible talent and her commitment to be the very best has brought her amazing success on the global golf stage and has inspired so many others in the game. Félicitations, congratulations to Brooke!”

HENDERSON CLOSING IN ON ALL-TIME CANADIAN GOLF HISTORY
With her seventh win, Brooke Henderson is just a win shy of tying Sandra Post for the most victories by a Canadian player in LPGA Tour history. With one more one, she would also join Post, Mike Weir and George Knudson as all-time Canadian golfers with eight PGA TOUR or LPGA Tour victories.