YANG LEADS, HENDERSON AND YIN TRAIL BY ONE AFTER 36 HOLES AT CP WOMEN’S OPEN 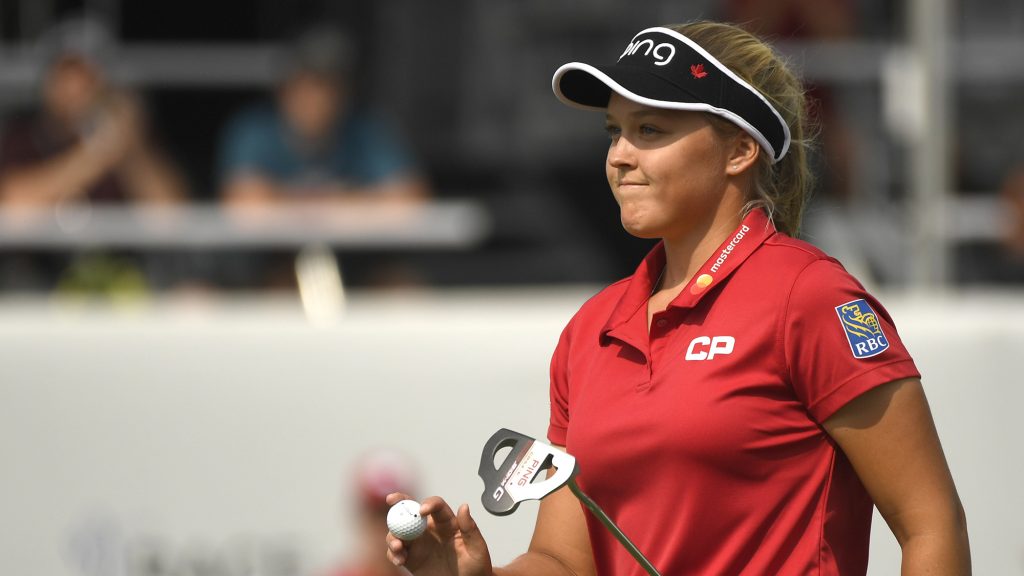 REGINA, Sask. (Golf Canada) – Amy Yang, gunning for her first victory of 2018, shot a second-round 65 at the CP Women’s Open to hold the 36-hole lead at 13-under 131. The three-time LPGA Tour winner, who last visited the winner’s circle in February 2017 at the Honda LPGA Thailand, took advantage of the prime early scoring conditions, carding nine birdies to just two bogeys.

“My putting was really good today,” said Yang, who needed just 26 putts Friday. “I was hitting it pretty solid out there, but I gave myself a lot of good chances, and I think I made most of them out there.”

Yang holds a one-stroke lead over young guns Brooke Henderson and Angel Yin. Henderson again had partisan Canadian crowds following her every move, thrilling the fans with a closing birdie at No. 9, while Yin carded three consecutive birdies to finish her round.

“To be close to the top of the leaderboard heading into the weekend is awesome, especially when you’re here in Canada.”

Those words from Brooke Henderson highlight what could be a classic fairytale for Canada’s beloved star. Henderson started the day with a 55-yard birdie putt from off the green that set the pace for a crowd-pleasing round of 6-under 66 and a tie for second, one stroke behind the lead.

“To see that many people there to watch me finish was incredible. I was happy I was able to birdie for them and get to 12-under. It was a great day,” said Henderson, who carded seven birdies and one bogey on Friday. “I think starting on the back nine kind of gave me a lot of momentum, making a lot of birdies, and then was able to finish really strong here.”

If her hot streak continues over the weekend, Henderson would become the first Canadian to win Canada’s national championship since Canadian Golf Hall of Famer Jocelyne Bourassa accomplished the feat in 1973. She’s already set her best CP Women’s Open 36-hole score by eight strokes (she shot 140 in 2016) and heads into the weekend in the top five – the highest position she’s ever held in her home tournament.

While any hometown hero would feel the pressure of winning, Henderson felt comfortable and enjoyed Friday’s round.

“It’s definitely a lot easier to play in front of the fans when you’re playing really well,” Henderson added. “So, hopefully I keep it up.”

WEATHER COMES INTO PLAY AT WASCANA
Weather was a major factor on Friday afternoon, with winds gusting to 35 mph and temperatures quickly dropping. Winds picked up significantly starting at 11 a.m., giving players in the morning wave a marked advantage on those who played in the afternoon. The scoring average for the morning wave was 71.5, while it was 74.6 for the afternoon wave.

“I kind of was a little flustered in the middle when the wind picked up,” said Angel Yin, who carded both of her bogeys as she adjusted to the changing conditions. “I didn’t adjust quickly enough and I wasn’t hitting it well.”

Of the players in the top 10, only Ariya Jutanugarn (T4, three strokes behind Yang) played in the afternoon and she started the day tied for the lead.

CP BIRDIES FOR HEART
The second round saw 27 sub-par scores (all birdies) at No. 17, which amounts to $135,000 raised on Friday and $300,000 overall for the Jim Pattison Children’s Hospital via the CP Birdies for Heart program, which donates $5,000 per sub-par score

SCORING AND START TIMES
Scoring and Pairings for the 2018 CP Women’s Open are available here.