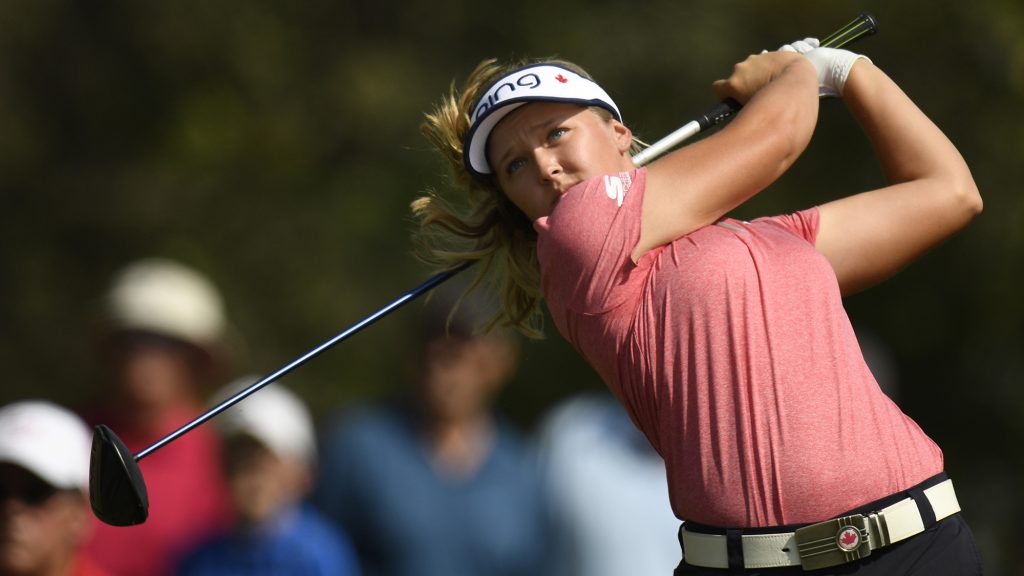 REGINA, Sask. (Golf Canada) – A trio of players at very different places in their LPGA careers sit atop the leaderboard at 8-under 64 after 18 holes at the CP Women’s Open.

Ariya Jutanugarn, who won the CP Women’s Open in 2016, is aiming for her fourth win of 2018, a season where she is leading the LPGA Tour in numerous statistical categories. Second-year player Nasa Hataoka struggled in her rookie year of 2017 but broke through in June for her first LPGA Tour victory at the Walmart NW Arkansas Championship presented by P&B, while nine-year veteran Mariajo Uribe is still looking for her elusive first victory. The three players combined for 26 birdies and only two bogeys and sit one stroke clear of Angel Yin and Nanna Koerstz Madsen at 7-under 65.

Canadian favorite Brooke Henderson of Smith Falls, Ont., opened with a bogey, but came back with four consecutive birdies at holes 4-7, finishing at 6-under 66 and in a seven-way tie for sixth, a group that includes three-time CP Women’s Open champion Lydia Ko.

REGINA OUT IN FORCE FOR CANADIAN FAVOURITE HENDERSON

If you see a crowd on a Canadian golf course when the LPGA Tour is town, you can pretty much bet they’re watching Brooke Henderson. That was certainly the case on Thursday, as throngs of Regina natives lined the first tee as Henderson opened her first round, and they stayed with her for all 18 holes.

“When I first teed off this morning the fairway was lined and I wasn’t necessarily expecting that,” said Henderson, who carded eight birdies and two bogeys in her 6-under 66. “It was really amazing. The crowds just seemed to hang with me all day, even though it’s late. Even walking up 18 there were tons of people.”

While Henderson has reached the weekend at the last four CP Women’s Opens, even she admits the first round at her national championship has not necessarily been her friend. Today marks the first time she broke 70 in the first round, setting herself up for what she hopes is a strong finish – and just maybe becoming the first Canadian winner of this event since 1973.

“If I can do something like this over the next three days I think good things could happen,” said Henderson, who would join Jocelyne Bourassa as the only Canadian female to win her national golf title on home soil. “I’m just taking it a shot at a time and day by day and hopefully climbing up the leaderboard a little bit every day.”

With their first-round 64s, Nasa Hataoka, Ariya Jutanugarn and Mariajo Uribe set the course record at Wascana Country Club. The previous mark was 65, shot by Todd Fanning of Winnipeg and Charles Fitzsimmons of London, Ont., when the course hosted the 2017 Canadian Men’s Mid-Amateur Championship.

RED AND WHITE DAY
On Friday, August 24, we invite you to wear your brightest reds and your whitest whites to celebrate Canada and show your support for the Canadian players competing in our National Open. Canadian flags will be handed out at the main entrance while supplies last.

CP BIRDIES FOR HEART
The first round saw 33 sub-par scores (31 birdies and two eagles) at No. 17, which amounts to $165,000 raised for the Jim Pattison Children’s Hospital via the CP Birdies for Heart program, which donates $5,000 per sub-par score.

SCORING AND START TIMES
Scoring and Pairings for the 2018 CP Women’s Open are available here.